Ebike Classes of the United States

When you first discover ebikes, the whole concept just seems fascinating! An electric bike that can function both like normal bike and a motor powdered vehicle just seems convenient and modern. You might very quickly get carried away looking for your dream bike.

It can get a bit confusing, though, once you start thinking about what kind of vehicle an ebike is though. You might be thinking is it a motorcycle, a traditional bike or somewhere in between? More importantly, what are the rules that apply to an ebike?

Luckily, in most places there is classification system that helps deal with this problem.

In the United States, the state law of 26 states divides ebikes into three different classes. Each class of ebike caters to a different type of user with certain needs, but also come with a different set of regulations governing their use. Which class a user wants to choose will be mainly based on whether they want to travel in urban or rural environments. It will also depend on how fast the rider needs the bike to go and if they need to be able to use the bike in all the places a traditional push bike can be used.

ebike classes in the US

In twenty-six states of the US, there are three different classes of ebike. There are eighteen states that use unique classification systems. There are five states, there is no legal definition for ebikes (meaning they are classed as other types of vehicles).

Here are the 26 states that use the standardized three tier classification:

Each class defines ebikes by three things: (1) if they have a throttle, (2) how fast they can travel and (3) if they have a PAS (Pedal Assist System, which gives an extra electric ‘boost’ to the bike when you pedal).

The first class of ebike has a top speed of 20mph. It does not have a throttle, so it relies totally on the PAS for power. It’s best to think of this kind of ebike as similar to a traditional bike with just a little bike of electrical assistance, as it cannot go to very fast speeds. These ebikes are treated by a lot of states like traditional mountain or pavement bikes, so they are most suited to dedicated bike lanes, roads, and trails.

The second class of ebikes also has a top speed of 20mph. However, it also has a throttle used in combination with the PAS. It can’t go any faster than the ordinary class one, but it is a bit easier on the rider as they can choose if they want to use the pedals. Again, these ebikes are often treated like normal traditional bikes and can often go wherever those ones can, but it depends on the state. Some states like New York and Michigan State have restrictions.

The third class of ebikes has a top speed of 28mph. There is also another regulation on the motor for this class – it must be less than 750 watts.

Whether or not it is allowed a throttle depends on the local regulations. In somewhere like California, for instance, throttles are not allowed. Whereas in New York, a throttle is totally fine. It also has PAS, so the rider can switch between PAS and throttle.

These ebikes are often more suitable for roads and on-road bike lanes, but often cannot be used on standard off-road bike lanes and trails because they are too fast.

What class is our ASTRO and ASTRO PRO?

C3STROM’s ASTRO is a class 3 ebike. It has a BAFANG 750W hub motor, which is the maximum wattage allowed for this class of bike. Initially, when you turn on the bike, the maximum speed is capped at 28mph with pedals and 20mph on throttle only – which is the maximum speed for this class. When riding in this default riding setting, the bike fits the standards of the class 3 ebike category mentioned above in this article, meaning the bike does not require a license or insurance (in most states).

As the bike fits the requirements for a class 3 ebike, legally, that means it is in a special class of vehicles which has a unique set of regulations that apply to it. As mentioned above, the rules and regulations vary by state; some states do not even use this classification system and others use a modified version of it. Subsequently, it’s important to check rules and regulations for ebikes in your own state before riding. In most states, however, the ASTRO and ASTRO PRO will be treated as a special type of vehicle that is closer in legal status to a traditional bike than a motor vehicle like a car or motorcycle. That’s why you won’t need a special license or insurance in most cases.

For our future EU customers, we will have a different default riding mode called ‘pedelec mode’. In pedelec mode, when a speed of 25km/h is reached, the pedal assistance cuts out automatically. The bike will be in line with EU legal requirements for ebikes, as the requirements specifically state that bikes must not go beyond 25mph with pedal assistance. Therefore, the bike will not require any special license or insurance. 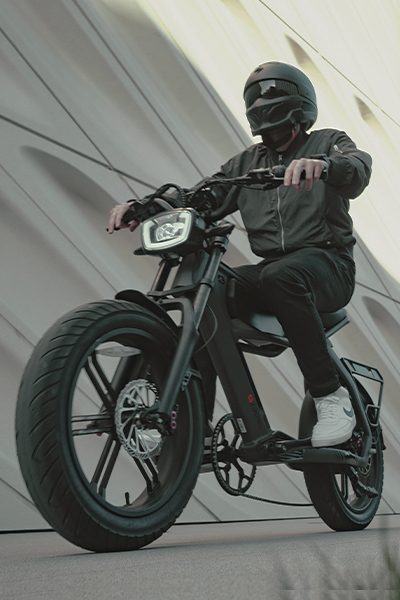